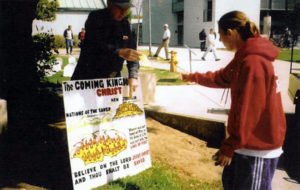 Preaching outdoors, in the open air, outside the walls of religious meeting houses has a long history going back to the prophets of the Old Testament.

A popular place for OT prophets to preach was the GATES of the city (Proverbs 1:20-21).

Isaiah 29:21 and Amos 5:10 mentions those who hate and lay a snare for the man who “rebuketh in the gate.”  ISAIAH AND AMOS WERE STREET PREACHERS!

JEREMIAH WAS A STREET PREACHER!

JOHN THE BAPTIST’S ministry was “in the wilderness” and at the Jordan River, where he did his baptisms.  Since Jews returning to Galilee from their pilgrimages to Jerusalem would not go through Samaria, their route home took them to the Jordan river, to follow its course north.  Here at this major thoroughfare we find John the Baptist  and his sermons ringing with righteousness, preparing the way of the Lord.  (Matthew 3:1-2; Mark 1:4; Luke 3:3)

John 7:37, “In the last day, that great day of the feast, JESUS STOOD AND CRIED, saying, If any man thirst, let him come unto me, and drink.”

JESUS WAS A STREET PREACHER.

Our Lord’s most famous sermons were preached outdoors: the Sermon on the MOUNT, the OLIVET discourse (on the Mount of Olives); His parables were preached from a boat “at the sea side” (Matthew 13:1-2) to a crowd on the beach (Jesus was a BEACH PREACHER!)

THE APOSTLES in Acts were no strangers to outdoor preaching.  Acts 17:17 tells us that Paul  “disputed in the market daily.”   The early Christians had no church buildings so their sermons were of necessity preached outside of meeting house walls.

OPEN AIR PREACHERS SINCE THE APOSTLES

Our Anabaptist history of Baptist thinking continuing unbroken since the Apostles (see TRAIL OF BLOOD by J.M. Carroll) is full of examples of men preaching outdoors.

WALDENSES in France in the 12th century sold their possessions and gave the money to the poor, and travelled by twos through the villages of Europe, reading the Scriptures to multitudes in their own language, and preaching in the markets.  The Pope launched Inquisitions against them to stamp them out.

HENRICIANS, followers of Henry of Lausanne, also preached in the street of southern France in the 12th century.  They preached against images and infant baptism.

PETROBRUSSIANS, followers of Peter of Bruys, made enemies of the Papists as they preached open air in France in the 1100s.

LOLLARDS were taught by John Wycliffe in England in the 14th century, and preached against popery in the streets of England.  Wycliffe translated the first English Bible and influenced all later Refprmers.  The Papists dug up his dead body from its grave, condemned him as a heretic, burned his body, and threw the ashes into the Thames river.

THE HALDANE brothers, who along with Rowland Hill founded the Religious Tract Society.  These Baptists started a great revival in Scotland in the 1800s as they preached outdoors.

SPURGEON, the ‘prince of preachers’ and pastor of the Metropolitan Tabernacle in London, started out preaching in the streets (as did D.L. Moody and Billy Graham), and taught open air preaching to his pastoral students.

AMERICAN COLONISTS who were Baptists impressed Jefferson and Madison with their views on religious freedom.  Baptists were often jailed in Virginia, where they would preach to crowds outside through the window  of their jail cell.  Jefferson used to enjoy pulling up a camp stool and listening to Baptist outdoor preachers.  (Encyclopedia of Religious Freedom: “Baptist Dissenters in Virginia”)

“No sort of defense is needed for preaching out of doors, but it would need very potent arguments to prove that a man had done his duty who has never preached beyond the walls of his meeting-house.  A defense is required for services within buildings than for worship outside of them.”  (C.H. Spurgeon)

For more information see Lectures To My Students by C.H. Spurgeon and his two chapters on “Open Air Preaching.”

Verse of the Day